The Functional Approach and Yin Yoga- My Day with Paul Grilley 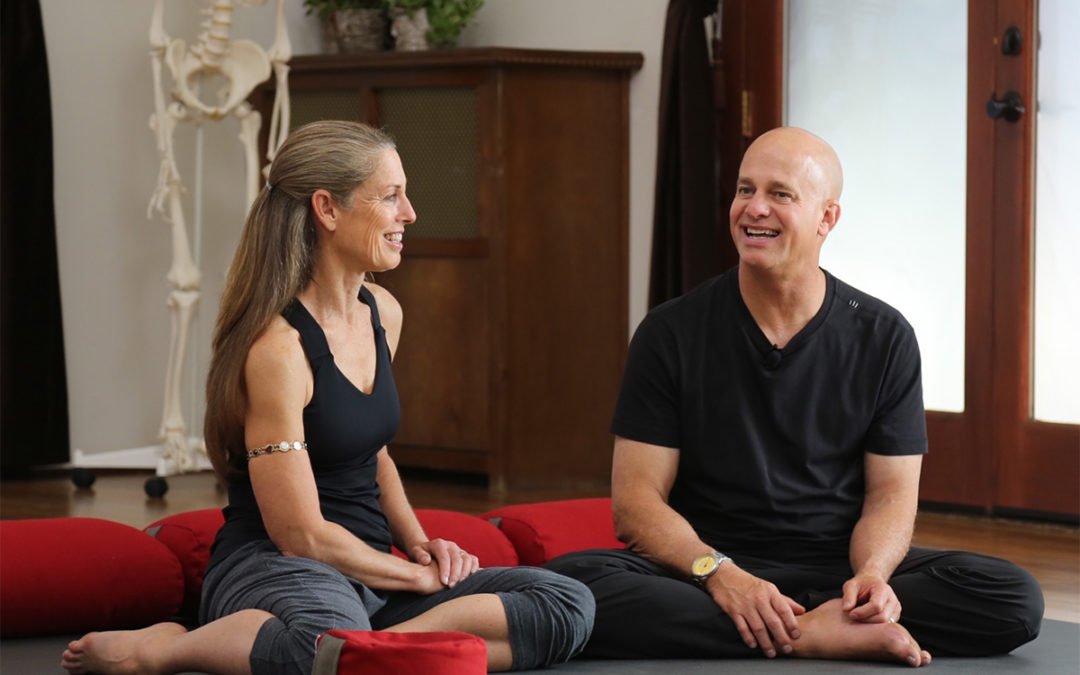 Best known as an innovative and brilliant Yin Yoga teacher, Paul has a masterful understanding of anatomy and his ability to convey his knowledge is superlative. He made anatomy practical and accessible by supplementing his use of a skeleton with live demo models from among the yogis present to illustrate particular concepts.
I was present for the last of a five day shoot and the focus was ‘functional yoga’, a method of teaching yoga that applies equally well to ashtanga as it does to yin. A functional approach is pragmatic rather than aesthetic, which is to say concern with which body part(s) the pose is targeting replaces concern with how the pose should look. A new concept for most practitioners of modern postural yoga.
Many of us have come up going to group classes and been taught alignment principles of varying degrees of strictness. Particular emphasis is usually placed on where the hands and feet are in relation to the rest of the body. Almost everyone is familiar with directives to articulate the back foot at an exact rotation and in an exact relation to the front foot in poses like Virabhadrasana I and II, or to sit with the seat touching the floor (or block), knees together, inner heels snug at the hips in Virasana. This approach can have the effect of making poses painful, or even undoable for students whose particular structure does not allow them to articulate their joints to such degrees.
Structural limitations show up when bones bump into each other at a joint (knee, hip, shoulder, spine, elbow) and restrict the range of motion such that no further movement is possible. No amount of stretching will change this; we are limited by our structure simply because when bone rubs up against bone there is nowhere else left to go. No amount of ‘letting go’ or ‘breathing through it’ or ‘releasing the emotion’ will change this.
A functional approach to yoga accomodates the diversity of people’s bodies by focusing on the target area of the pose (for example, glutes and outer thigh in pigeon) and allowing the arms and legs move whatever way is necessary to access the target area. In Paul’s words: “In a functional approach to yoga there is no perfect pose. Each hand and foot position helps or inhibits our ability to stress the target areas. The most effective way to do this varies from person to person.”
The radical inclusiveness of this approach is genius. All are welcome to the practice when we teach functionally. Yin yoga is everyone yoga. Thank you Paul Grilley.

use the code SACREDCOW for 10% at checkout for a limited time at www.pranamaya.com

Dearbhla Kelly began practicing yoga in 1994 while studying philosophy in Amsterdam. She holds M.A.’s in philosophy from University College Dublin and the University of Illinois at Chicago. Currently based in Los Angeles, she teaches yoga, neuroscience and philosophy workshops worldwide.

Dearbhla is particularly skillful at marrying the esoteric teachings of yoga with the practicalities of everyday life, and integrating insights from current science to deepen our understanding of how yoga helps us find increased joy, wellbeing and freedom. She also finds great joy in doing yoga with children who have cerebral palsy. She has published articles exploring the aforementioned subjects in Yoga Journal, Huffington Post and other publications. See more about Dearbhla at durgayoga.com