Does Politics Belong in Yoga? 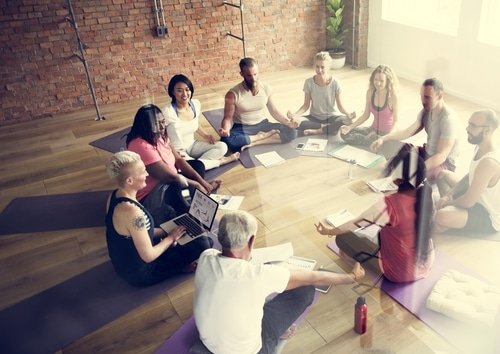 You’re in a yoga class. The teacher mentions something about ahimsa and strongly states his opinion about all the damage the US is doing in Afghanistan. Several of the students nod their heads in agreement. One picks up her yoga mat and walks out, never to return again. Her son is a US soldier in Afghanistan.

This type of situation comes up again and again in the yoga world, and it’s the source of much debate. Sure, most teachers think it’s cool to deliver anti-war or Occupy Wall Street rhetoric in class because they believe their students are all liberals who simply tend a bit toward apathy and need a gentle push to vote, protest, or fight against injustice. There may be some truth to this, but it’s not the full picture. Everyone does yoga these days, and that includes conservatives. So, preaching to a liberal base can alienate some students—or worse, turn them off to yoga altogether because they feel like an outcast in class.

OK, so yoga teachers should stay clear of political rhetoric. Right? Well, not necessarily. Yoga also teaches about viveka, which is often translated as discernment. True politics—meaning the type of politics that is not about chasing power or fame but about championing causes based on one’s (hopefully noble) values—goes hand in hand with discernment. After all, we are talking here about deciding how and how not to live. This also feeds into the first part of the eight-limbed path: the yamas or restraints that yogis consider to be a part of right living. Are the yamas political, then? Perhaps.

Personally, it’s hard for me to use my yoga practice as a tool for becoming fired up and political when it’s precisely  my yoga practice that has opened me up to seeing other points of view and not always believing that I am right. (And I was always right before I started practicing yoga.) This is not to say that I won’t fight for something I believe, but I’m not sure I’d use my practice as a platform for that fight. On the other hand, I do believe, as yogis, we are often so busy knocking at the door of nirvana that our practices become an excuse for not taking part in bettering the social landscape. But, then, as conscious beings, we need to look closely at what ‘bettering’ means, and to whom it applies. In politics, this is sometimes a nuanced equation.

What do you think about yoga as a political platform? If you are a teacher, do you talk politics in class? As a student, do you like or dislike the introduction of political talk before or after asana? Write in and tell us what you think.