Do Yogis Have to Be Vegetarian? - Pranamaya Yoga
0 Items

Do Yogis Have to Be Vegetarian? 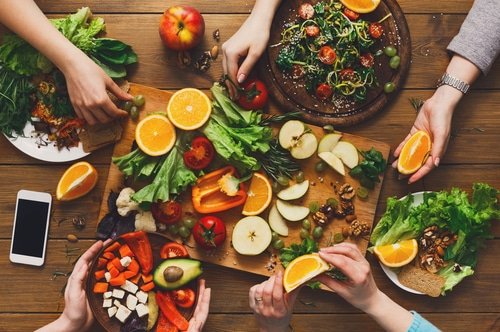 It’s one of the most controversial topics in the yoga world: vegetarianism. Some say you’re not truly practicing yoga if you eat meat; others say that not all body types can thrive on purely vegetarian diets. Is there a definitive answer?

On any retreat, you’re bound to hear a lively discussion at the lunch table about whether or not yoga practitioners should eat meat. Neither side takes their position lightly. After all, yogis don’t do things without reason!

The vegetarians say that ahimsa, or the yogic practice of nonviolence, prevents them from eating animals because it’s violent to take the life of another living being. Vegetarians also say that meat-eating inhibits us from achieving deep states of meditation because it negatively affects the energy body. (Pranamaya teacher Dharma Mittra discusses this at length in the Cow’s exclusive Q&A this month).

The non-vegetarians are often practitioners who once tried to be vegetarian but didn’t feel healthy while on that diet. They say it made them feel ungrounded, and that it created conditions associated with vata imbalance (an ayurvedic term for too much wind and ether).

I have to admit: I fall into the latter category. I was a vegetarian for about 10 years, and I ate well, but I was in the worst health of my life. I tried adapting my diet in all different ways, as well as attempting a host of other treatments, but I had chronic conditions that would not go away. Every acupuncturist I went to told me to eat meat, but I refused. Finally, one of my yoga teachers, who is also an Ayurvedic doctor, told me to start eating meat. With a lot of resistance, I slowly introduced small amounts into my diet. It wasn’t the only change I made at that time, but it was the most significant—and my health improved drastically over the next couple of years. I struggled (and still do, at times) with tremendous conflict over eating meat. But I know I am not alone in the experience I had; at least half of the practitioners and teachers that I know have similar stories.

What’s your story? Are you a vegetarian? If not, did you try it once? Can one eat meat and still be a yogi? And how far should one go to be a vegetarian? Write in and tell us what you think. (Passionate responses welcome!)