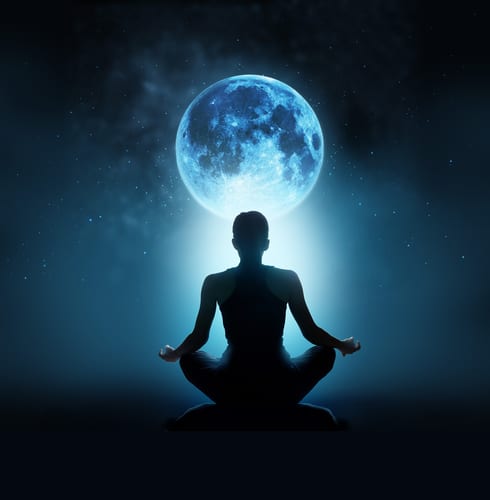 At my brother’s wedding last month in New York, I mentioned to a wedding guest that I wrote about yoga for a living. “Is that a religion?” he asked. “No, no,” I answered, immediately dismissing the idea that I might be “a religion writer” and simultaneously wondering how many drinks it would take for a total lightweight like myself to forget that I was wearing three-inched heels.

I went on to explain that yoga is more of a philosophical system than it is a religion. He tried to argue, citing some book he’d heard of, but I contended that I should know—after all, I’ve been studying the path for more than a decade, and he’s never even taken a yoga class.

In the next two weeks—in perhaps a little wisecrack from the universe—every single yoga class I went to was chock full of references to God. One teacher talked about putting trust in God, another talked about praying to God on the full moon.  Even in an anti-gravity yoga class that I went to, the teacher went on and on about the nature of the soul. And then I started thinking about all of those Friday nights I’ve spent with friends chanting our bespandexed butts off to Shiva and Krishna. I even know people who have chosen to get married by a yoga teacher instead of a priest or rabbi. Of course,  I acknowledge that there are pretty devoted atheists who love their downward dogs (and I am certain the feeling is mutual!), but it doesn’t take George Burns to tell you that God has definitely entered the yoga room—and, according to many yoga masters and historians, has always been there.

I dig God as much as the next person (well, maybe more, if the next person is one of the aforementioned atheists), but what I am wondering here is if all of this God talk means that yoga—and by that, I mean the Westernized version that the majority of us practice—has become a bona fide religion? And even for those who keep God out of the picture, might this still be the case?

To answer this question, maybe we need to look at what a religion is. A religion is often defined as a combination of an adherence to certain customs and practices (check), philosophical principles and values that dictate how one lives (check), and often, but not always, a belief in a higher power (check … sort of).  And most religions have a wide range of followers who observe with varying levels of devotion (think: your 24-Hour Fitness Yogi versus your Off-to-Nepal-For-a-Year Yogi). While everyone knows that modern day yoga has connections to Hinduism and Buddhism, most of the people I know consider themselves yogis, not Hindus or Buddhists. Could it be that yoga, in itself, is a religion, and everyone is just afraid to call it that? Do you consider yoga to be your religion? If not, does the philosophical foundation of yoga support your religious beliefs (or lack thereof)?

Write in and tell us what you think.