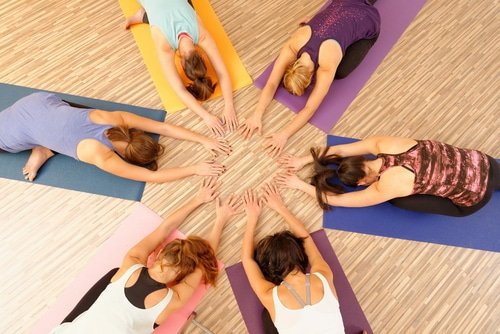 Nischala Joy Devi is a master yoga teacher and healer. She has developed many yoga programs that serve those with life-challenging illnesses, and her teachings emphasize the practice of compassion. She authored two books: The Healing Path of Yoga (on yoga therapy) and The Secret Power of Yoga (a female-centered interpretation of the Yoga Sutras, also made into a CD). She talked to The Sacred Cow about the importance of including a heart-centered—and female—perspective in one’s yoga studies.

Sacred Cow: What inspired you to write a woman-centered interpretation of the Yoga Sutras?

Nischala Joy Devi: I had studied with some wonderful teachers, including Swami Satchidananda, who I studied with as a monastic disciple for more than 20 years. But all of my teachers were men. And, as I started to teach, I realized most of my students were women.

I’ve always been drawn to the Sutras, and I started to teach them because I wanted people to know what yoga was really about. Still, all of the translations and commentaries were by and for men. There were almost 1500 translations of the Sutras and not one of them was by a woman. The result of this was that the ideas in the interpretations were all coming from the mind. There wasn’t much heart in it. I realized that the heart—which is more of a woman’s perspective—had to be represented.

SC: Can you offer some examples of how the mind is dominant in male interpretations of the sutras and how the heart is underrepresented?

NJD: Yes, let’s look at the second sutra. Yoga cita vriti nirodaha. The translation is usually something like, “Yoga is control of the mental modifications of the mind.” My version of this Sutra is: “Yoga is the uniting of consciousness in the heart.”

It’s not a matter of control, it’s a matter of uniting and allowing our consciousness to be present, and realizing we already have that stillness inside. Even in asana, if we push, it doesn’t work. If we just do it gently, we find that the body’s natural intelligence takes over. Controlling the mind is a very difficult thing to do. But, if you open the heart, the mind becomes quiet. This is spoken about in the Upanishads, which talk about the consciousness that lives in the heart. To me, that’s really where we need to go. And that’s the essence of yoga.

SC: These teachings sound like they come from the Tantric lineage. Do you identify with that?

NJD: We don’t have to categorize it. To me, it’s Tantra, Sankya, even Vedanta because when we speak about Vedanta, we’re implying that we are all one. It’s actually Taoism too. It doesn’t matter what we call it. It’s just about letting go of the mental, which we have made the supreme, and going back to how we feel, and how we live our lives from the heart perspective.

SC: What are some other ways that you adapted the Sutras?

NJD: I put in ways to use them in daily life. Also, I divided the Sutras into chapters to make it easier for people to study. And I removed the “he” pronouns. In most translations, it talks about Ishvara [God] as “he”, and I thought that was unnecessary. When a woman reads “he” she feels like she’s not a part of what is being said. My research suggests that Ishvara was meant to be genderless. So, instead of using a pronoun, I talk about knowledge, wisdom, and love as the omnipresent teachers in all beings.

I also created the audio book CD with women in mind because a lot of the women who do yoga are busy people, and often mothers who spend a lot of time in the car doing errands and taking kids to school or afterschool activities. Now, they have the opportunity to listen to the sutras in their cars or if they are doing something else around the house.

SC: Why did you choose the Sutras, of all of the texts, to investigate from a female perspective?

NJD: Most of the stories in yoga are men talking to men, like in the Bhagavad Gita with Krishna and Arjuna. What attracted me to the Sutras is that they are not, in themselves, gender specific. There is also a simplicity to the sutras that is not in the Bhagavad Gita. The Sutras just tell me who I am and, when I forget, how to get back to that. The Sutras are also practical. They are not just philosophy—they offer practices that tell you what to do to find joy.

SC: Why do you think the Sutras are geared toward men in the first place?

NJD: I don’t think the Sutras were meant to be intended just for men. Patanjali compiled the Sutras, but he never wrote an interpretation of them. This way, each person could interpret them in a different way.

But the scholars who interpreted them were all male. Part of the reason is because the women in India at that time weren’t permitted to study. They did the worship, the puja, the chanting, and the men were the scholars. Women didn’t even learn to read and write. Women were often considered second class citizens. Today, we live in a different society, but as long as the books are still written from a male perspective, we will still think this way.

SC: Did your woman-centered interpretation get any criticism?

NJD: Yes. It was celebrated a lot and sold out the first printing before it had even become available to the public, but a lot of male teachers were unhappy about it. For example, one teacher said, “Oh, then your husband should write an interpretation from a male perspective.” Of course, there are already 1500 of them written from a male perspective.

SC: Is your book only for women?

NJD: No, it’s simply from the heart-centered perspective. It speaks to anyone who is practicing yoga today. It’s a way to understand the Sutras in the context of our modern life, taking into account the empowerment of women in society, and also the idea that we must start coming from the heart. Yoga has become too based on the physical, and the texts are too based on the mental. It’s a good entry point, but yoga is so much more. Look at the world today, at what we’ve done because we’ve lost the heart. Yoga has to come around and be seen as a whole practice that invites us to include the heart.

To learn more about Nischala Joy Devi, visit her website at www.abundantwellbeing.com, and check out her Secret Power of Yoga CD from Pranamaya. (Her book by the same name, published by Random House, is also available here.