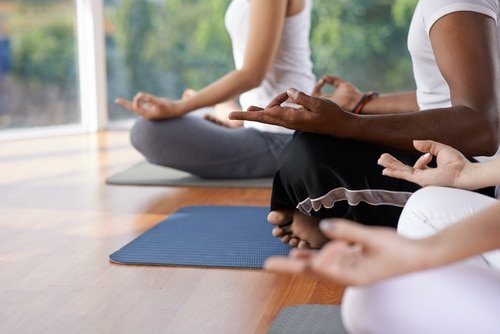 This month, The Sacred Cow talks to Mark Horner, a San Francisco Bay Area-based Shadow Yoga teacher, about the importance of preparatory work in asana practice.

Preparatory work consists of simple, yet dynamic movements and positions that are given to a student to practice before he or she even begins an asana practice.  They are an important part of Shadow Yoga, which was developed by master teacher Zhander Remete and is an evolving style of yoga that draws from the shared principles of Hatha Yoga and self-cultivating arts like martial arts and dance.

Pranamaya: What is the point of a student doing preparatory work to prepare for asana practice?

Mark Horner: A lot of people nowadays just go right into asana practice, without understanding that there is a certain preparation that needs to be in place first. One way to think about it is like house painting. Whether it’s interior or exterior, the preparation often takes more time than the actual painting: scraping the old paint; masking, taping, and repairing wood that may be rotten; moving furniture out– this stuff can take a long time. And there have been times I have cut corners and just slapped the paint on, and in the end it’s usually not a good idea. So, what I have found in painting is that if I just take the time in the beginning I actually save time later on. I don’t have to go back and clean up mistakes that I have made. And I think that’s very true about the yoga.

Asana is not just a stretching thing. Each asana is done for a certain amount of time, and in time the healing benefits of that asana will manifest if someone knows how to behave intelligently in it, how to breathe and work with bandhas. If you do the preparatory work, you’ll better understand the asanas when you get to them.

PM: Can you say more about what the preparatory work specifically accomplishes?

MH: The first goal is to purify the body. If a person is overweight or just generally unfit, there needs to be a period of time when that’s corrected because the yoga practices require a certain capacity of fitness just to bear the stress of the work. This might include a pancha karma or an internal cleanse, but on the physical level it’s callisthenic-type work to build strength, reduce excess, and mitigate excess dosha.

Then, you wake the power and functioning of the legs. This is important because the basic energetic capacity of a person is determined by the functioning of the legs. If the legs are weak, then there’s a diminishment in the power of respiration, which will affect pranayama. Also, if the ankles, knees, and hips aren’t working well, a person can’t sit properly in a seated asana for meditation.  Waking the legs is best done through movements that are mostly nonlinear: squatting, shifting, lunging, turning. In yoga today, most people do very linear movements, like Surya Namaskar. But the body is organized in spiral patterns, the muscles are not laid down in linear pathways. If you look at the Taoist work, the Tai Chi, the Qigong—they have a lot of round movements. The body actually needs these types of movements in order to open up the joints slowly.

PM: In addition to cleaning up the body and waking the legs, are there other goals that the preparatory work accomplishes?

MH: Preparatory work includes circular and spiral movements of the limbs, and this helps to open the peripheral structure of the body. The way the energetics of the body are organized, the channels of the legs and arms feed into the central channels, so failure to get the arms and legs freed up first results in an inability to get that energy into the spine. Preparatory work also builds the power of the waist and the vital center, through practices like Uddhiyana Bandha, and Mayurasana.

MH: Some of this stuff doesn’t look anything like yoga. On the grossest level, you might be doing kicks, twists, going up and down on the toes many times – these exercises are quite physical and help to strengthen the legs and raise the heart rate.

On the more refined level is some of the lunging and shifting that you see in Shadow Yoga, shifting from side to side, turning on the balls of your feet, coordinating the movements of your arms with your legs. A lot of it involves deep bending at the knees and ankles, all done in a weight bearing fashion. It also incorporates poses like the horse stance.

PM: It sounds like the work is mostly standing postures.

MH: Stance work must precede the seated work. Beginners should, for the majority of the practice, be on their feet. If the energy can’t be mobilized in a standing position, it will definitely not happen when seated. This is all very important for building a person’s energetic capacity.

PM: What about the hands?

MH: Even though there is an emphasis on the legs, the arms and hands are not left out of the picture. In preparatory work, there is a lot of moving the hands in tandem with the feet. Skillful use of the hands increases sensitivity.

PM: How long does someone need to do preparatory work before they can begin a proper asana practice?

MH: I would say the average person should do preparatory practices for at least three years, but it will differ from person to person. Then, gradually, different asanas are introduced. The primary asanas are usually introduced first, like seated forward bends and backbends done in a prone position on the belly, which strengthens the back and helps stoke the agni. Then, later, the inversions start to come.

MH: For whatever reason, yoga seems to have lost a lot of this tradition of preparatory work. It used to be there in the more traditional setting, before yoga became so popularized. My teacher Zhander Remete has put a lot of thought into this and he’s looked at the preparatory work that’s done in a lot of the self cultivating arts in Asia and he’s made it an essential part of the Shadow Yoga practice. But these types of preparatory practices are certainly still available in a lot of the martial arts traditions, at least the internal ones. I think that if the principles are understood, people can basically figure out what to do.

PM: Did you start yoga this way, with years of doing preparatory work?

MH: No, when I first started I was kind of rushed into things. I was doing headstand by the 2nd or 3rd class I attended. I could do it, but I really had no idea what I was doing. I didn’t know how to behave there. I think it was far too soon. I know that, because of my haste when I first began, I later had to go back and clean up a lot of mistakes.

PM: What are some of the risks of skipping preparatory practices and, in general, progressing too quickly in one’s asana practice?

MH: One of the obvious risks is injury. Probably the most common joint that tends to get damaged is the knee. Another problem is the simple failure to actually make progress. A person may be able to assume a shape but that doesn’t necessarily equal an asana unless they are also able to settle their mind and contain and circulate their prana.

PM: Why do teachers move students into asana practice so quickly?

MH: I think, in this society, we’re used to getting things quickly and there’s a general impatience and a lack of appreciation for the tradition in which things are given gradually from the teacher to the student in order to test the student’s seriousness and commitment. It’s unfortunate that it’s the way it is, but it’s a societal thing–we’re impatient.

PM: How do you encourage your students to be more patient?

MH: I tell them that you have to make peace with repetition – find the subtlety in it and the nuance. I spent years practicing the piano, and there’s a lot of repetition in learning piano, so I had an advantage coming in. People don’t realize it, but if they practice more slowly this way they end up progressing a lot faster.

To learn more about Mark Horner, visit his website at www.horneryoga.com and check out his Online Courses with Pranamaya.