Q&A: David Newman on the Kirtan Craze and the Human Heart 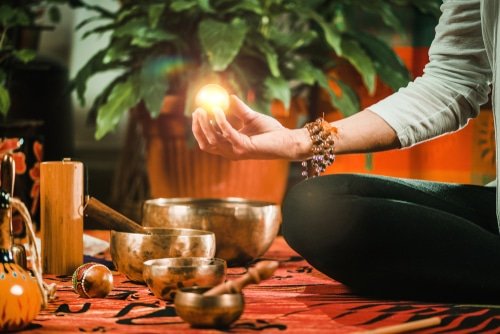 David Newman, also known as Durga Das, is becoming one of the most recognized names in the rapidly growing kirtan movement. To date, he’s released six CDs—including Lotus Feet, Leap of Grace, and To Be Home—and he was one of the headliners at Bhakti Fest 2010. Pranamaya  talked to him about the devotional practice of kirtan, and why so many yogis are now singing its tune.

Pranamaya: How did you first get into kirtan?

David Newman: I started playing music when I was in my early teens and I started practicing yoga in college. Then in 1990, when I was in law school in New York City, I was working at a metaphysical bookshop during the summertime. Someone who worked with me was affiliated with an ashram in upstate NY and she invited me for the weekend. That was my first kirtan experience.

After law school, I started teaching yoga instead of practicing law, and I opened a yoga studio in Philadelphia called Yoga on Main. In the ‘90s, Neem Karoli Baba started coming into my sphere, in my meditations, and my dreams, and I hosted some of his disciples—kirtan wallahs like Krishna Das, Bhagavan Das, and Jai Uttal—at my studio. They had a huge impact on me. They had taken kirtan out of the ashram setting and integrated it with some interesting musicality. I started to write music again and it started to be directed in the devotional realm. Now, I travel full time as a kirtan wallah. Finding kirtan was kind of like the big landing for me in terms of my reason for being. It fits who I am.

PM: You were at Bhakti Fest this year—what did that feel like?

DN: I think about Bhakti Fest and I think about the folks who were involved in Motown or any new exciting movement and I often feel that way about kirtan. To me, Bhakti Fest was a kind of Woodstock. There’s definitely a momentum and a passion for it and it is very exciting to be a part of.

SC: Why do you think this movement is happening?

PM: Everybody enjoys music and if one who is oriented on a spiritual path, it’s going to be a natural connect.

Also, kirtan is a lot like hatha yoga in that it’s really tactile. You come into a yoga class and you immediately feel a shift take place. And that’s the same thing in kirtan. It’s a powerful experience. The way that the mantras are calibrated, all you have to do is just sing and it happens. It’s not something you have to work at—it comes to you. And kirtan works on the level of the heart. In this age, with the challenges of life and the bombardment of technology, there’s a real tendency for the heart to shut down and close. So experiencing an open hearted feeling is something that all of us seek.

PM: How does kirtan work on the level of the heart?

DN: These mantras were developed to work on the heart by sages and rishis from thousands of years ago. Through the use of vibration, they reflect or mirror back things inside of us that may have become hidden. Kirtan literally means “to praise that which is exalted”. And I like to think of kirtan as a sort of exalted expression of who we are. So just think of all of the different vibrational impulses happening within us as human beings, and picture all of those vibrations happening at a higher frequency. The mantras are like these big magnets that just draw everything in us into a higher place. That’s why all of a sudden you feel this expansion and this heart opening.

PM: If we really think about it, Kirtan is kind of an odd ritual in the West—we are chanting in a language we don’t know to Hindu deities that are foreign to us. Can you explain what we are really doing when we practice kirtan?

DN: It really depends on who’s experiencing it. There are three ways that people can connect with kirtan.

If one is oriented toward eastern spiritually, one can focus on the form of the deity. For instance, Krishna is male, blue, and he wears a peacock feather. He can be imagined playing with the gopis or sitting in Arjuna’s chariot going into battle in the Bhagavad Gita. So one can imagine his form when they chant.

Someone else might connect to the qualities that Krishna embodies. Krishna is an embodiment of certain qualities like levity, love, devotion, playfulness, wisdom. The word Krishna means “the light of bliss”, so when I am singing to Krishna, I am evoking that light of bliss that dwells within all of us.

And someone might simply focus on the sound. In a Sanskrit mantra, the name is not separate from that which it describes. If I say to you the word “apple”, there is a separation between the word and the thing itself. To actually experience an apple, you have to bite into it and taste it. But kirtan is different. There is no separation between the name and what it describes. When you say Durga, the essence of the word is embodied fully in the name itself. You needn’t attach anything to the name, just lose yourself in the sound.

I like to keep all of these possibilities open so people can have experiences wherever they’re at. To me, kirtan doesn’t belong only to Hindus or yogis, it belongs to the human heart.

PM: Where do you see the future of kirtan going?

When I opened Yoga on Main in Philadelphia almost 20 years ago, it really was the only yoga center in town. Now there are so many yoga centers in the area. It’s a beautiful thing. The same thing is happening now with kirtan. You see all of these different groups and ensembles sprouting all over the world. And there are people blending the vibration of kirtan with really interesting musical styles, like folk, jazz, reggae, rap or fusion. There’s so much diversity in kirtan that listeners can gravitate toward its presentation in a way that touches their taste preferences.

But it’s so difficult to know where it’s all going to go. Mainstream music is not what it used to be. The mainstream is very narrow—it’s Justin Bieber, Lady Gaga, and Taylor Swift. But the music industry isn’t about breaking into the mainstream anymore. Years ago, if you didn’t get played on the radio or sold at a music store you didn’t exist as a musician. Now, because of ITunes, Amazon and digital distribution, there are all of these different niche neighborhoods in music. Like kirtan, world music, new age music—and these genres are crossing over to each other. I can do what I do and make a living from my passion and my sadhana, and it’s an amazing thing.

To learn more about David Newman, visit www.davidnewmanmusic.com and check out Leap of Grace: